We are two days into a three day weekend. Friday was a public holiday celebrating the Mid-Autumn full moon. The big party is on Thursday evening, and we headed to Victoria Park to join the festivities. But we were probably too early and nothing really happened. A lot of people were milling around, that's about all.

Later that night, we stumbled upon a gastro pub advertising more than ninety different beers. Sounds like a place for us! And it was. More than decent food, and an impressive list of beer. Even a couple of Nordic beers: Mikkeller, Nögne, and Grythyttan! The latter is surprising, as it'is hard to find even in Sweden.

Friday we thought we'd go to Stanley on the south coast of Hong Kong Island. And so did most others do, too. The bus queue looked pretty bad, but since the buses arrived more or less continuously, it took just ten minutes to board. Unfortunately, not all heading to Stanley did so by bus. It took us forty five minutes to get to Stanley...
The Stanley Market is a street market, but not only with the usual touristy crap. There are a lot of stalls with high quality shops selling clothes by their own design, handicraft and so on. Last time we were in Stanley, two years ago, Yvonne bought half a shop of linen clothes.
We had dinner at a great little Indian restaurant, Curry Tiffin, before heading home again.

Saturday we decided to go to IKEA here in Causeway Bay. It was really interesting to see how different it was, at the same time as it was undoubtedly IKEA. The differences were in the size of the furnished "rooms" where they show how one could use their products. 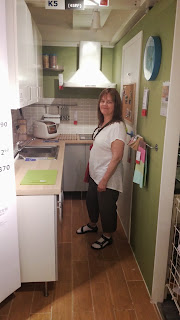 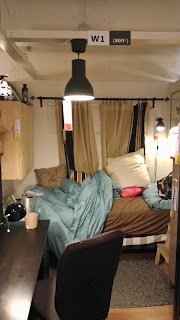 These rooms were tiny and they had their respective sizes displayed.

But of course the rooms here are smaller. The display rooms at IKEA in Sweden are the size of an decent apartment here.

We needed nourishment after IKEA and went to SOGO for High Tea. Not as good as in York, but still...

Tomorrow Hong Kong will be hit by a severe typhoon. Interesting.