After five days in our new home town, we have made some observations.

Last night we had the best dinner so far. We went to Yu, 4 Yiu Wa Street, Causeway Bay, a small Sichuan restaurant just two block away from Time Square. We were lucky to get a table as we arrived, later there was a constant queue outside. 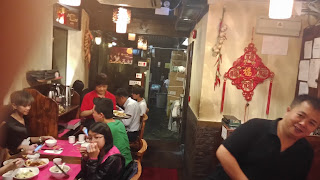 We had an assortment of dishes, the killer dish was woked chicken with peanuts and asparagus. Spicy,  but not fiery, with Sichuan pepper, contrasted by a hint of cardamom. We will be back for more shortly!

Today we are going back to Central to look at an apartment. It may be our next home.
Posted by Yvonne and Mats at 12:31 No comments:

The apartment we have now, is only until end of September, so we need to get something else. Causeway Bay is fascinating with all its shops, malls, and restaurants. But it is also crowded. Constantly. At first, we thought it was a Sunday phenomenon, but now we realize it is all days, all times. It is kind of cool to walk through these hordes now. In ten months time? Maybe not so much.

So we went to Central, up the Mid-Levels Escalator to a couple of addresses. It was an interesting experience when we had passed through SoHo (South of Hollywood, a bar and restaurant area halfway up the escalator): Everything got calm! It even got cooler! We will try to get something on Robinson Rd or Mosque St. Maybe.

We also made a quick visit at the office. Looking forward to working there!

Mats is making himself known: People stop and laugh, pointing at the beard. Or, as a waiter did, wishes us a Merry Christmas!
Posted by Yvonne and Mats at 22:32 No comments:

First Day Is Over

Quite jet lagged, the first day concentrated on a few things:


We live at Time Square, in the middle of what seems to be a shopping area. There are shops and department store everywhere. Just across the road is a massive one with at least 14 floors, Lane Crawford. In the basement is what will be our local supermarket.


Dinner at Din Tai Fung, after dinner beer at East End Brewery.
Posted by Yvonne and Mats at 23:50 3 comments:

After a completely uneventful flight, we are finally in Hong Kong.

Lovely Aily met us at the airport, with Erik and both daughters and gave us a silvery spoon to symbolize our birth as Hong Kong residents.

A long cab ride later, we are settled in our home for the coming month. It is a very long time since we lived in such a tight quarters.

Now it is time to get some food.

At last we're on our way!

I miscalculated the amount of baggage grossly, even with the brand new suitecase, I needed two extra bags. All in all almost 100 kg. Well below our allowance, but still impressive. Or scaring.

Now we are in the Aurora lounge at Arlanda. Nice selection of beers: Melleruds Pilsner and Sleepy Bulldog, both on tap.

Posted by Yvonne and Mats at 01:18 No comments:

Packing is close to frantic, but under absolute control, or so we think/hope.

Today we got information about where we will be staying the first month: Shama Serviced Apartments in Causeway Bay. It is not exactly where we wanted to stay, but due to a misunderstanding between us and the Hong Kong office, nothing had been arranged for us. This was discovered last night, and with only one day to make arrangements, we had to make do with whatever was available at this short notice.

A Little Bit About Hong Kong

Hong Kong is the Hong Kong Island, Kowloon and Norther Territories. plus almost 300 islands. Since the area is very hilly, only some 25% of the land is developed, mainly in Kowloon and the northern side of Hong Kong Island. This must mean that the actual population density is four times higher!

About 94% of the population is of Chinese descent, the rest a mix of South Asians (Indians, Pakistanis, Nepalese, and some Vietnamese). A number of expats from Great Britain, USA, Canada, Japan, and Korean are working in the commercial and financial sectors. An estimated 250,000 domestic helpers are from Indonesia and the Philippines.

Cantonese is Hong Kong's de facto official language. English, also an official language, is spoken by slightly less than 40% of the population. As a visitor or an expat, there is no problem getting around using English.

Whatever cuisine you want, you will most probably find it someplace in Hong Kong.  All Chinese cuisines are represented at restaurants, with Cantonese being the "local" kitchen. Beside the Chinese restaurants, you will find all East and South East Asian cuisines everywhere. And of course American and European. A true Hong Kong experience is yum cha (飲茶), drink tea, i.e. dim sum with tea.

More on what and where to eat in out blog Eating in Hong Kong.
Posted by Yvonne and Mats at 06:16 No comments:

Email ThisBlogThis!Share to TwitterShare to FacebookShare to Pinterest
Labels: Info

One Week to Go!

It is now just one week to before we leave for Hong Kong. It will be a tough week, trying not to climb the walls in anticipation. We are pretty much set; the infrastructure is ready to switch off and pack (must have the infrastructure up and running first thing we arrive!), most/all clothes and stuff is ready to be packed.

Only one thing that isn't quite ready yet: The visa. Sure, we can enter Hong Kong and stay there for three months without a visa, but we cannot be employed without the visa. I am not the worrying kind, but I really would like to have the visa soon...

Mats
Posted by Yvonne and Mats at 07:04 No comments:

With just over a week until we go, we had some colleagues over for pizzas and beer. Or maybe beer and pizza. Kind of a so long, and thanks for all the fish, but not so definite.

We know there are a lot of very nice and socially competent people at the Hong Kong office, too, but even so we will miss our Stockholm friends and colleagues.

They had better arrange a dev fest in Honkers this winter!

Still haven't started packing. The infrastructure is ready to switch off and pack, and that is the main thing. We must have everything up and running and be connected first thing we arrive! Priorities are important!
Posted by Yvonne and Mats at 22:42 1 comment:

We are both big city people, preferring to live in the city and to go to cities on vacations. We both love big cities like London and New York. For a long time, San Francisco was our absolute favorite, having been there a number of times in the eighties and nineties, much because of it being a cultural melting pot where everyone is accepted. There is an air of tolerance that permeates the entire city that we really appreciate.

In 2006, we came to Kuala Lumpur on our first trip backpacking in Southeast Asia. KL is also a big city with a very diverse ethnicity; Malays, Indians, Chinese, Arabs, and others, live side by side in tolerance. Another factor making KL our favorite city is all the good and exciting food! Plus, of course, very friendly people.

Early 2011, I went to Hong Kong the first time. Visited ORC's Hong Kong office to spread the gospel of performance testing. Hong Kong almost instantly dethroned KL. It is a cultural melting pot of epic proportions. Its architecture is breathtaking with 40+ story high-rises with a-room-and-a-half footprint next to shacks. The food is so diverse with all the Chinese cuisines, all of the rest of Asia (even found a Nepalese restaurant!), and of course the ubiquitous European and American restaurant (which I avoided). And all the people filling the streets, the sidewalks, and the walkways!

When home again, I started a campaign with the goal of going to Hong Kong with Yvonne on a vacation. In September the goal was reached as we landed on Hong Kong International. I was somewhat wary that I might have over-sold it, but my fears came to rest at once: Yvonne loved Hong Kong as much as I do!

But everything is not due to Hong Kong's virtues, our friends Aily and Erik (Erik is a colleague of ours) helped making us feel both welcomed and special. We hope to repay them when they, in a few years, move to Sweden.

Posted by Yvonne and Mats at 05:33 No comments:

Today we got a mail from the Hong Kong immigration authorities requesting proofs of my academic merits. Of which I have none. Proofs, that is.

To make things easier(?) we decided to apply for only one visa and for no reason at all, I am the applicant. Yvonne is a "dependent" on my application. There is essentially no difference if one of us is a "dependent" or if we have separate visas, the "dependent" is allowed to work, too.

But it is I who must prove my academic merits. And I have no such proofs, never had. I have never been asked to present any proofs before.

So I mailed the Archives Department at Stockholm University and requested transcripts. Don't know how long it will take. Probably quite a while.

Until the proofs have been presented, the visa application is in hiatus.

Mats
Posted by Yvonne and Mats at 01:39 No comments:

There are tons of things to prepare before moving to another country. We need visas with working permit, someplace to live, browse the market for a decent bank and a good mobile phone operator. And we need to decide what to do with our Stockholm apartment while away.

Luckily, we have the fantastic Joanne at the Hong Kong office helping us with the visas. She will also set us up with someplace to live the first month.

The Internet is invaluable, too. We can sit at home, browsing the markets, looking for deals, making lists of which banks look good and so on.
Posted by Yvonne and Mats at 15:38 No comments: