We took a short trip to Guangzhou, just over a weekend. Guangzhou was (and is) a blank spot for us, all we knew was that it is know as Canton and that it is the the capital of the Guangdong (Canton) province. The urban area has a population of 11 million, more than Sweden.

We took a train from Hung Hom, a railway station on the south tip of Kowloon. Pretty early, for us.

It is just a two hour ride from Hung Hom to Guangzhou, and the ride was pretty uneventful. We had been warned about the Guangzhou East railway station, high risk of pickpockets and/or mugging, so we took the fastest route we saw out if the building. Our worries dissipated fast, IKEA is there to keep us safe!

Our hotel was five km from the station, straight south, so we took aim at the Canton Tower and set off. We didn't really know what to expect, but were surprised never the less. This part of Guangzhou is called the New City and is brand spanking new. Very modern architecture surrounded well designed parks and large open areas for people. Lots and lots of greenery!

Growing more and more hungry, we became desperate for a restaurant with English menus. Eventually, we found Buddy's Bistro, what looked like a greasy spoon joint. But we could read the menu (maybe not understand it, though). So we ordered some noodle, a pork chop bun, some dumplings, and some stir fried broccoli with fermented bean curd. They got most of it right. And the food was really good! Surprise number 2.

We reached the hotel, way much more fancy that we had thought (surprise #3). The room was almost as big as our apartment with a generous king size, sofa, desk, and a bathroom that had everything. Including a TV.

The evening came and the view from our hotel windows turned spectacular! We had Canton Tower in full view and it had a light show that was mesmerizing.

Armed with the name and address for a seafood restaurant, we went out in the night. More lights. More colors. More.

We grabbed a cab, gave the cabbie the address and went for a twenty minute ride to a place just by the river with lots of restaurants, bars, and clubs. Here was the Guang Zhou Hong Xing Seafood Restaurant. English was a problem here, just as at Buddy's Bistro, but they wrangled up two happy boys who did their best, and did fine. This was one of the gigantic Chinese restaurants that probably had room for a thousand seated guest. And a massive staff running around serving the guests. Yvonne wanted steamed fish, so she went off with one of the boys to all the fish tanks with live fish to decide which fish she wanted. And we order some more. Just a little. Some fried rice with seafood (most certainly the best we ever had, ever), some dumpling (ah, these little bundles of exquisite and subtle taste), a few deep fried seafood spring rolls (deep fried = good), some braised pork belly with abalone (pork belly = good, abalone = good, together very good), water cress stir fried with garlic (garlic anything is good). Unfortunately, the portions were quite a lot larger than they are in Hong Kong, so we ended up eating only half of what we ordered.

A stroll along the river got us out of the food induced coma.

A cab took us back. Cabs are cheap in Guangzhou: A twenty minutes ride cost us just over US$ 3.

The hotel wanted US$ 40 for their buffet breakfast. We didn't want to pay that. So we had a light breakfast at our room. Worked just fine, thank you!

Sunday was spent mostly on Canton Tower. The highest observation deck is 488 m above ground, the highest we have ever been in a building. The view is great, albeit restricted by the hazy smog. You had to pay extra to get to the topmost deck. Money well spent, as we got our own security detail following us around. 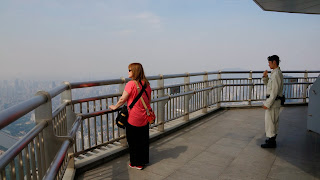 What surprised (surprise #4) us when looking at Guangzhou from above was all the parks. Any direction you look, you see more than one park.

As a Swede, you know that you should never, ever eat at tourist attractions like the highest building in town. But we gave the Chinese restaurant Color on 103rd floor a chance. Surprise #5: Excellent Dim Sum!

We took the APM (Automatic People Mover) back towards the railway station and walked along the marvelous park in the middle of New City. Winding paths, small streams, benches, calm and serene.


It was now that we realized that all the parks we walked through, and all the vast open areas for people to mill around in where actually the roofs of vast, multi-storey, underground  malls. Surprise #6. We sauntered through one of them, just one floor, before it was time to head for the railway station and our ride home.

We know that we have only seen a very small part of Guangzhou, but we really liked what we saw. All we came in contact with were extremely polite and helpful. Language is an issue, as English isn't commonly known, and we don't speak neither Mandarin nor Cantonese, alas. But we want to go back. More than once.
Posted by Yvonne and Mats at 21:29