One of the benefits of living in Hong Kong is all the exciting places you can go to over weekends. We actually have quite a list of places we would like to go to while being here, categorized by climate. The past weekend we had picked Seoul, mostly because it soon will be too cold to go there.

So Seoul it was!

Neither of us had ever been to South Korea, so we tried to read up on what to do before going. But we still got something of a culture shock. It is quite different from Hong Kong. Just a few speak English, and those who do, do it quite poorly. Road signs are few and far between, and often only in Korean. The so called English menus are in Korean, but with the dishes names transliterated to the Latin alphabet. It doesn't help me to know that the it is call "BongChu", I still don't know what it is. But this is one of the delights with travelling, to take leaps of faith now and then.

First night, we took a stroll along a nice little stream. Someone had told us about it. Thank you, someone! We ended up in an area of hectic nightlife called Gyongpyeong-Dong.
Lots of restaurants and bars, lots of Koreans, few westerners. We dropped in at a place with "English menus" and ordered a pork dish, "not spicy, only medium spicy" the waiter said. Yea, like sure it was. Hot, but very, very good! 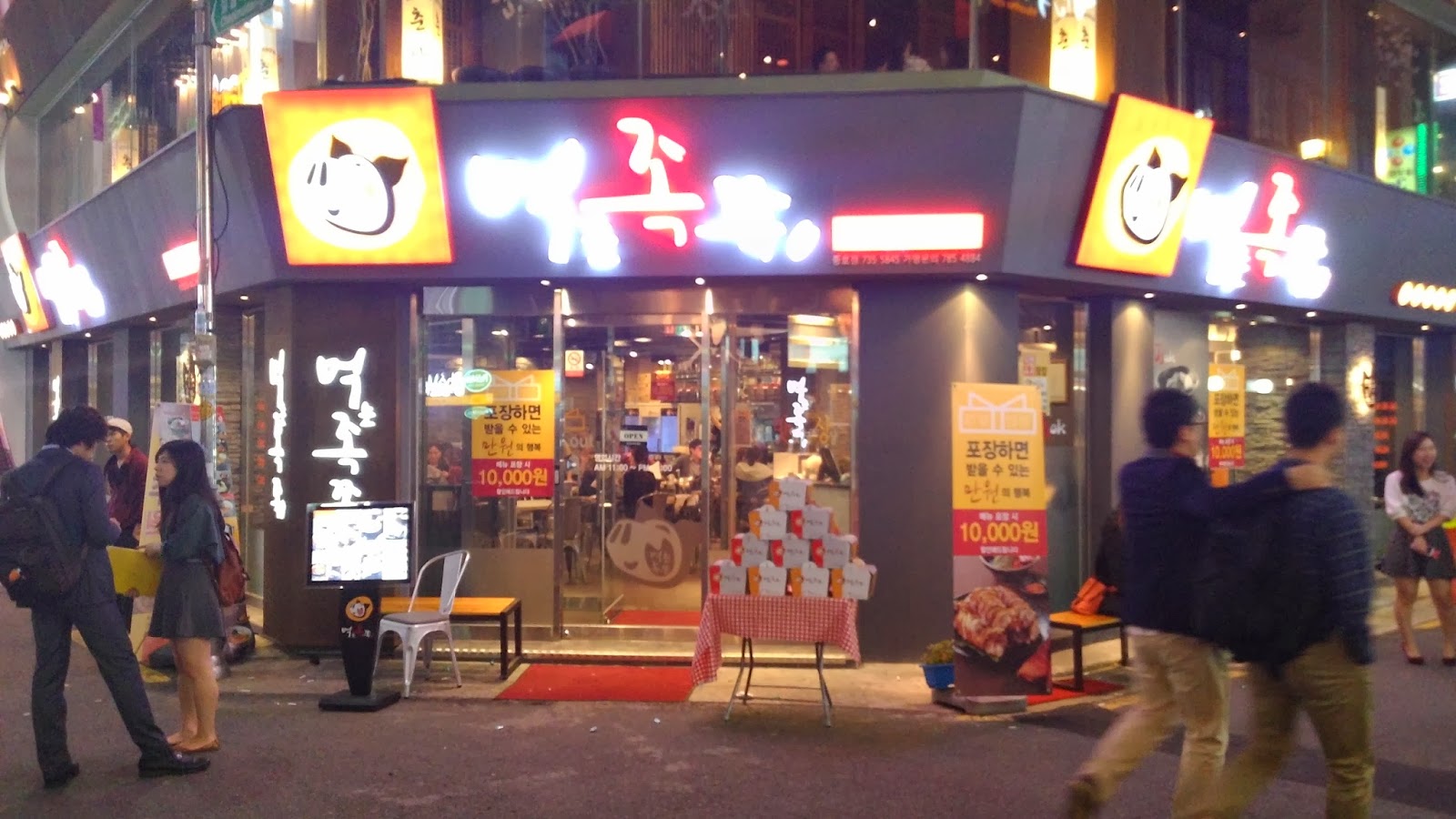 Saturday started with a hop-on-hop-off around the city bus tour. We like going on one of these when we come to a new town. They often give you a nice feel for the surroundings and are often good value for money. But not so here! The buss was full from start (we lived just by the starting point), but kept picking up more and more people along the route. Soon the aisle was filled to capacity, and most of the passengers were unable to listen to the commentaries available to the seated passengers. But that didn't mean so much of a difference, since the ones seated couldn't hear much of the commentary either. The on-board guide had a knack of only speaking while the commentaries were rolling, effectively making both himself and the commentary inaudible. 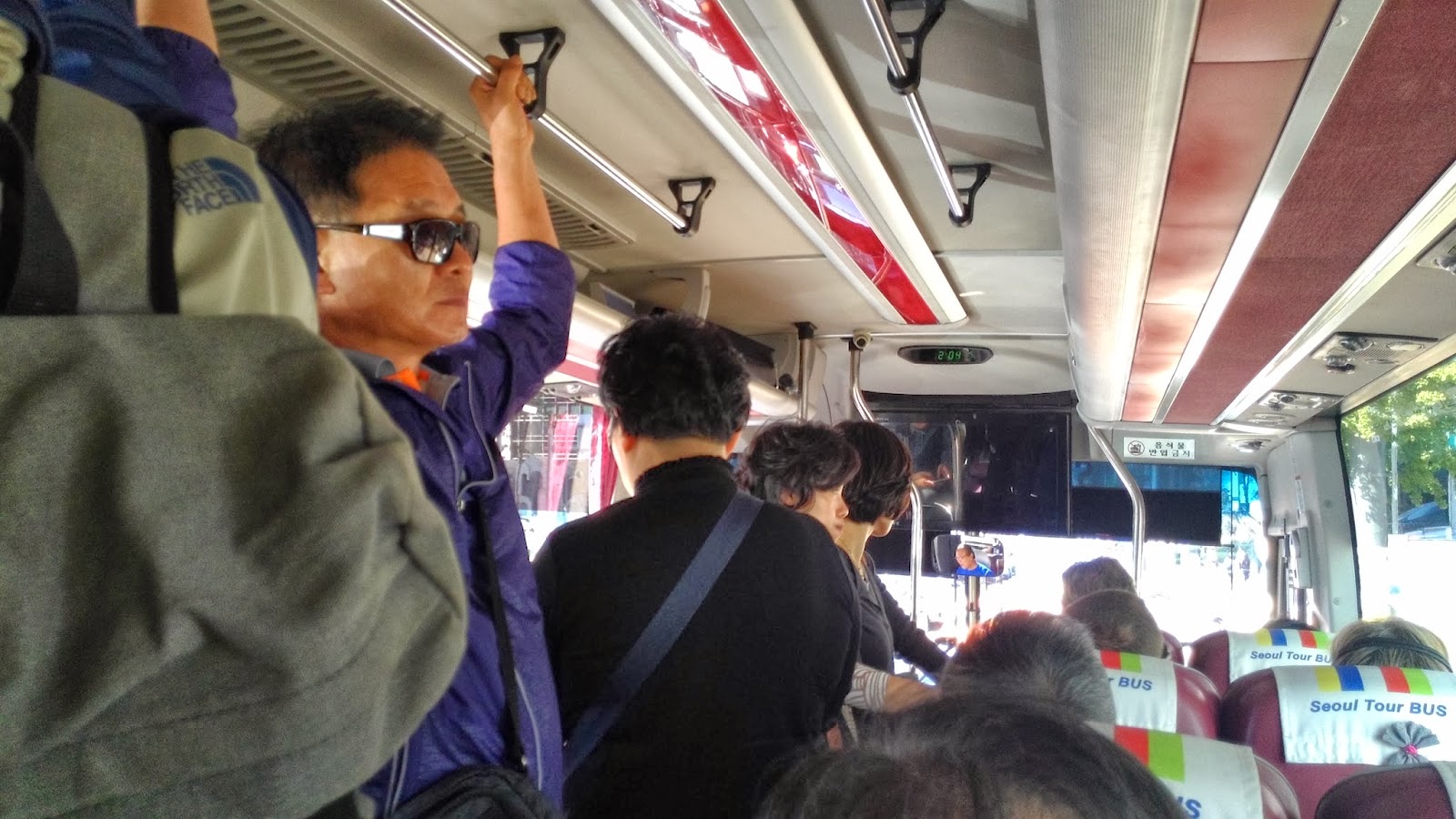 On top of this, the driver drove the bus as if chased by the cops. Max acceleration (with a shift stick) followed by hard breaking kept the standing passengers holding on for dear life. We got off half way through the two hour route. We didn't return, even though we had two-day tickets...

The Koreans are polite people, at least in comparison with the Chinese. Even young friends bow to each other when meeting, staff at restaurants and other places are very friendly in a polite way. And they seem to appreciate being treated politely. The city is also very neat and clean, maybe not compared to Singapore, but still. At least the very small part we visited.

We had heard about a good, modern Korean restaurant, not so far from the hotel. The Top Cloud at 33rd floor of Jongno Tower. We kind of guessed which house would be the Jongno Tower, but when we got close to it, we saw no trace at all of any restaurant.
After looking around, we decided to ask the receptionist in the ginormous lobby on the ground floor of what we thought was the tower. Yupp, we were at the right place, just take the elevator. Not until we were at the elevator did we see a sign for the restaurant. Impossible to see from the street. Oh, well.

The restaurant turned out to be French. And not just French, Guide Michelin Star wannabe French. But what the heck! Let's go French tonight! And we did. Eight courses and three wines later, all at a fantastic view of the city night, we didn't regret a thing. Non, je ne regrette rien!

Sunday was spent touristing. Went to a Hanok, a traditional village in the middle of the city. Like a Korean Skansen. Nice, but a little bit too simplified.

Seoul Tower was next. Took the cable car up the hill, which was a good move. We wouldn't have made it walking. Went to the top of the tower. A good view of the sprawling city. A little like LA, a lot of low houses, with some high-rises here and there. It's a big city. Some 22 million people in the urban area. 2.5 times the population of Sweden. In one city.

Dinner at a place that had just one dish on the menu, BongChu, braised chicken. You could chose how much (2, 3, or 4 portions), and how spicy you want it. Literally burnt from two days earlier, we went for just a little spicy. The food was once again very good, full of flavor and texture, although a bit strange to find parts of the chicken never served in Sweden. Not to humans, at least.

This short trip to Seoul made us want to go back. Nice people, good food, nice and interesting surroundings. Definitely worth a trip. Or two. Or three.
Posted by Yvonne and Mats at 23:19